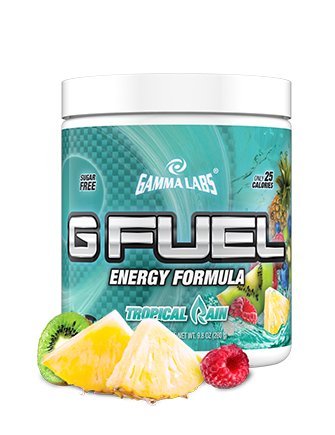 Formulated by Gamma Labs, GFuel is the apparent king of supplement hype, and arguably the first of its kind. Made with skill enhancing ingredients in mind, GFuel claims to help bring about a wide range of positive skill-based benefits to its users across the board. Question is, does GFuel truly live up to its name? Or is it just hype and nothing more? We took it for 3 weeks to get to the bottom of it. Let’s find out.

Who Can Benefit From GFuel?

Shortly put, anyone and everyone. GFuel is most often times sported by digital personalities, such as YouTubers, Streamers, and pro e-sports teams to name a few. But it’s not internet-exclusive, though. GFuel can and is actively taken by pro athletes too. You’ll find NFL players, weightlifters, students, and regular people take GFuel for the natural burst of energy, faster reaction times, and increased endurance it has.

Ideal ingredients, and lots of ’em. While GFuel may look ‘fluffed’ from the surface, the reality’s different. Unlike how other second-rate powders might contain enough for one ingredient complex, GFuel has 3 unique ingredient complexes for the same price, if not less. We tend to call this unrivaled. Although we believe the dosage can be improved, it’s hard to argue how much it has to offer at its price point.

Getting enough consistent energy to exceed the objective and win isn’t just helpful, it’s necessary. After taking a closer look, and even taking it ourselves for 3 weeks straight, we found GFuel could indeed deliver on its energetic promises. But to what extent? While we wouldn’t exactly classify GFuel as a pre-workout, it’s definitely effective for those wanting to ride a mild wave of pure energy for a few hours without crashing.

Being ‘in the zone’, or Flow State as we like to call it is crucial for success. Big league e-sports players and other top-notch athletes can all tell you how they’ve experienced flow to some degree or another, and some also attribute their achievements to it. If you ask a psychologist, flow is a state of mind. Basically, you’re so in-tune with the moment that all energy is being absorbed into one single activity, each movement almost perfectly orchestrated. While flow state’s naturally difficult to enter, GFuel does help make it more possible.

Antioxidants are important for a number of reasons, but namely to fight radicals. Free radicals, if not disposed of properly, can interact with cells and cause them to function poorly, or even die – leading to a loss in performance. Moreover, a free radical’s impact can be largely negated by taking antioxidants. They can safely break a Free Radical’s negative chain reaction before damage occurs to vital molecules. GFuel tackles this issue by including 19 different free radical fighting antioxidant powder extracts at 163.5mg.

Is GFuel Safe To Drink?

For most people, completely. GFuel contains a number of performance-enhancing ingredients which help to improve your focus, as well as total energy. There are also 19 antioxidants that help stave off free radicals from harming your body. Additionally, GFuel also has 5 different vitamins. They work to help ensure and support optimal bodily function. Take note, GFuel has ‘junk’ ingredients, like artificial sweeteners and dyes. This notice mainly applies to those who try to strictly avoid such types of ingredients.

We’ll be taking a cue from the official directions for this one. Just add one serving to 12-16oz of cool water, mix, and enjoy. Also, because GFuel’s effects are fast acting, we suggest drinking it about 15 minutes prior to beginning an activity. We typically found ourselves taking it before our studies, gaming sessions, exercise, or for whenever we simply needed some liquid motivation to help us out throughout our day.

Where Can I Get It?

We found the easiest way to get our hands on a tub of GFuel was to order it via Amazon. Our powder arrived quickly and in one piece after only two days of waiting since we’d placed our order. Tropical Rain is currently only available in a 40 serving option, so that’s what we chose. Although, there is one other choice you could opt for – the 20 serving stick pack box. We don’t recommend it compared to what the tub offers.

How Does It Taste?

Honestly, pretty darn good. That is, as long as you mix it with an adequate amount of water. Otherwise, it tastes just like you’d think a sort of tropical rainfall would. You can distinguish a few fruits from one another if you try hard enough. We suspect the artificial flavors and myriad of fruit powder extracts are behind this.

How Well Does It Mix?

As long as it’s added to an adequate volume of water, you won’t notice any unfavorable qualities. We recommend using anywhere between 12-16oz of water for optimal mixability. Otherwise, it’ll dissolve quickly and easily, only ever leaving behind a slight chalk at most. Also, while we haven’t particularly tried this ourselves yet, some users reported a positive experience combining their GFuel alongside fresh juice.

On the surface, GFuel is surrounded by immense amounts of hype – no doubt about it. But while most ‘hyped’ up supplements tend to let us down, GFuel held its ground. As always, we think there are a few things that could be improved, but in the end, GFuel still demonstrated its advertised effectivity. We’ll continue to use it well into the future and update this review as necessary. So, rest assured, GFuel can certainly help mind the proverbial gap.

Be the first to know about giveaways, special offers & exciting new features.

Keeping You In The Know

SupplementGuard is at the forefront in cutting edge fitness supplements reviews, articles, and more. We’re dedicated to providing you, our audience, with real, unbiased reports without the misleading tactics other sites tend to employ.

CAN’T FIND WHAT YOU’RE LOOKING FOR?